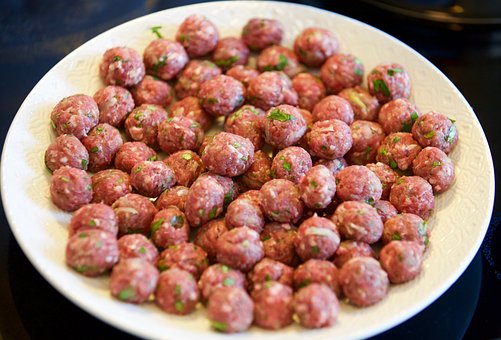 Meatballs originated on Earth. That’s about as close as we can get to narrowing down the point of origin for the ubiquitous comfort food, and even that may be inaccurate. We all know, when we boldly go where no gourmet grandmother in a sauce-stained apron has gone before, our initial contact with a strange, alien race includes a confrontation with the familiar yet always interesting and tasty universal joy, the meatball.

They may be made with beef, veal, pork, lamb, fowl, fish, or some mixture of meats and herbs. Before the kitchen grinder has been invented, cooks shredded and pounded the meat before forming them into balls.

And while countries prize their own notion of the dish, the meatball crosses all boundaries, thankfully trading traditions and ingredients so that no cook can predict a native version of the meatball truly unique to a specific culture. That is part of the meatball’s charm.

Why did the meatball appear independently in so many kitchens and cooking fires of early civilizations? Speculation focuses on the nature of the meat and meat’s lack in early times.

Because meat was rare, mixing it with starches and vegetables allowed the meatball to gain mass, feeding more people.

Storing meat over a long period makes it tough. Mixing it with salts, soft and vinegar foodstuffs like bread produces a tender meatball.

Leftover scraps of meat makes an economical meal in the meatloaf, with no waste of resources. The meatball, after all, is only bite-sized parts of meatloaf.

For Albanians, it is a mix of feta cheese with the meat. Indonesians serve meatballs in a bowl with noodles, bean curd and eggs. In Mexico, they use the same name as in Spain for meatballs, but the Mexicans serve their albóndigas in a soup, generally a light broth with vegetables. The Poles like giant meatballs, known as golabki (No, it is not pronounced as it looks), wrapped and baked in steamed cabbage leaves. Turkey loves meatballs, boasting more than 80 variations of it, each slightly different according to the region.

Italians know meatballs as polpette. Made from beef or veal, the ingredients of polpette can also include Paarmigiano, mortadella or even béchamel sauce. Italian meatballs are small, and in most areas of Italy, polpette is fried and served as an appetizer without sauce or topping to avoid masking the flavor. What Americans think of as a traditional mainstay of Italian cuisine, spaghetti and meatballs, is virtually unknown in Italy.

That’s not to say spaghetti and meatballs isn’t an Italian tradition. It is just that the dish is a culinary heritage created by Italian immigrants to America.

The wave of Italian immigration to America that started near the end of the 19th century eventually was the force for making pasta a staple of the middle class from the U.S., although it took time. Harvey Levenstein and Joseph Conlin, both professors of history who researched the food Italian immigrates ate in this country, found that social workers and nutritionists under the sway of a new field at the time, food science, were aghast at the immigrants’ diet of pasta, hard cheese, vegetable, fruit and garlic. These prospective nutritional reformers declared that many fruits and vegetables, particularly green vegetables, had little nutritional value and cost too much.

The Italian immigrants generally tried to ignore the advice, growing and canning their own fruits and vegetables as much as they could. Nevertheless the immigrants did find the nutritionists were right about one thing; fruits and vegetables in the time cost too much. Meat was plentiful and cheap in the U.S., however, at least by what they had been used to in the”old country.”

The seasonings the immigrants used were conventional ones from the Campania region of Italy, chiefly because Campanians early on established themselves as grocers in the U.S., making tomato paste, oregano and garlic easier to come by than typical seasonings of different regions. Because of this, Italian-American cuisine began with a base of Campanain food, but without an abundance of vegetables and cheeses.

Levenstein and Conlin suggest the joining of meatballs with pasta and tomato sauce had its origins in a number of baked Neapolitan pasta dishes served in religious festivals. However, the meatballs in those earlier dishes were the size of walnuts or less.

Diners also became accustomed to the use of garlic, oregano and hot pepper flakes in their spaghetti and meatballs, giving birth to a brand new Italian heritage in the U.S. which was embraced across the American population.